Why can't I find any studs in interior/exterior walls? Print

An interior/exterior wall (see the red lines in the illustration) is usually constructed differently than its interior only counterparts. This introduces several unexpected variables that will impact the sensitivity of your StudSensor™ or MultiScanner® stud finder. As opposed to interior walls, which are typically a single layer of 1/2" or 5/8" drywall, exterior walls can contain multiple layers of building material such as: siding, MBF construction board, tar paper, wire, and more. All this varying density and material can "confuse" a stud finder and produce false positive readings. 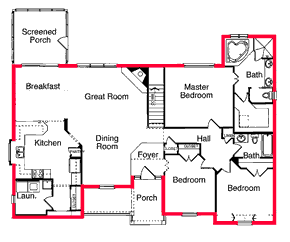 Soundproofing: Most soundproofing techniques include a combination of inconsistent density and metallic components which affects the stud finder's ability to accurately detect the changes in density.

For this reason, Zircon® stud finders are recommended for interior use only.

Did you find it helpful? Yes No

Send feedback
Sorry we couldn't be helpful. Help us improve this article with your feedback.